We set out exactly where we left from the day before..When we arrived a condition had formed up in a little bit shallower water than the blank water we would have been fishing the day before..We fished around for several hours until noon picking at the gaffers..The word on the radio was grim and we had one of the better catches of the fleet..So I gave my crew the option to go inshore and catch some spanish and look for a cobia..My boys here like bent poles so off we went..On the way in in 4 fathoms we saw a sailfish..Ran him right over.Pretty cool.Got to the hook and there where acres of spanish..We made quick work of a limit and they where classy fish..Arriving to the dock we made the right call. 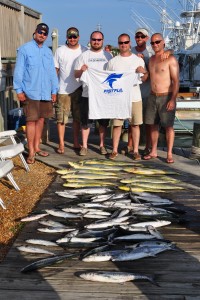